“Music begins where the possibilities of language end.”
– Jean Sibelius

The Duke Symphony Orchestra (DSO) consistently recruits between 80 and 100 musicians (primarily undergraduate students) each year from the Duke student body and the broader university community. Under the direction of conductor Harry Davidson, the DSO seeks to create a dynamic and enlivening environment for concertgoers and performers alike.

Members of the DSO Executive Committee, a small group of elected students, endeavor to foster a greater sense of community among their peer orchestra members who share a passion for music. The Executive Committee seeks to diversify Duke’s musical community by promoting the orchestra’s public performances and assisting with logistical work for each concert, as well as by hosting orchestra-related social activities outside of rehearsals and concerts.

The DSO’s repertoire ranges from the seventeenth through the twentieth centuries and includes well-known masterpieces as well as works that are heard less often. The DSO rehearses twice per week and hoss four regular-season concerts in Baldwin Auditorium on East Campus annually, with each concert drawing an audience of over 100 attendees on average. The DSO additionally performs at other University events, such as the Family Weekend Concert, and it also features the winner of the Duke Music Department’s Student Concerto Competition each spring. In previous seasons, the DSO has also performed a semi-staged opera biannually. 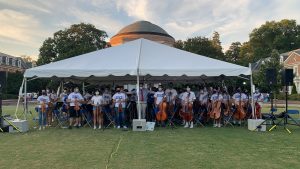 For the past ten years, the DSO has started each concert season with a fully student-organized Pops concert on the East Campus Quad, which has become a Labor Day weekend tradition in Durham. This lighthearted event is performed after only one Saturday rehearsal. As the DSO’s first event of the year, the Pops concert provides an intimate setting for introducing new members to the orchestra. By being held on East Campus, the Pops concert especially serves as a way for the DSO to welcome first-year students to campus life.

Each spring, the DSO travels to Beaufort, South Carolina to perform a benefit concert. Between 2004 and 2017, this event raised more than $250,000 for the Keyserling Cancer Center at Beaufort Memorial Hospital. Now, the Duke Symphony Orchestra performs this benefit concert in partnership with the Foundation for Leadership Education to promote programs that support leadership education and community in the South Carolina Lowcountry.